The Breech Tilt is a widely-known inversion technique using gravity to help a breech baby flip to a head-down position.
Before doing the Breech Tilt, I suggest doing the Forward-Leaning Inversion for 30 seconds first and then going ahead with the Breech Tilt. One daily Forward-leaning Inversion is recommended after 20 weeks gestation for any fetal position. As always, check with your doctor or midwife to see if you have a health condition that would be worsened by going upside down. 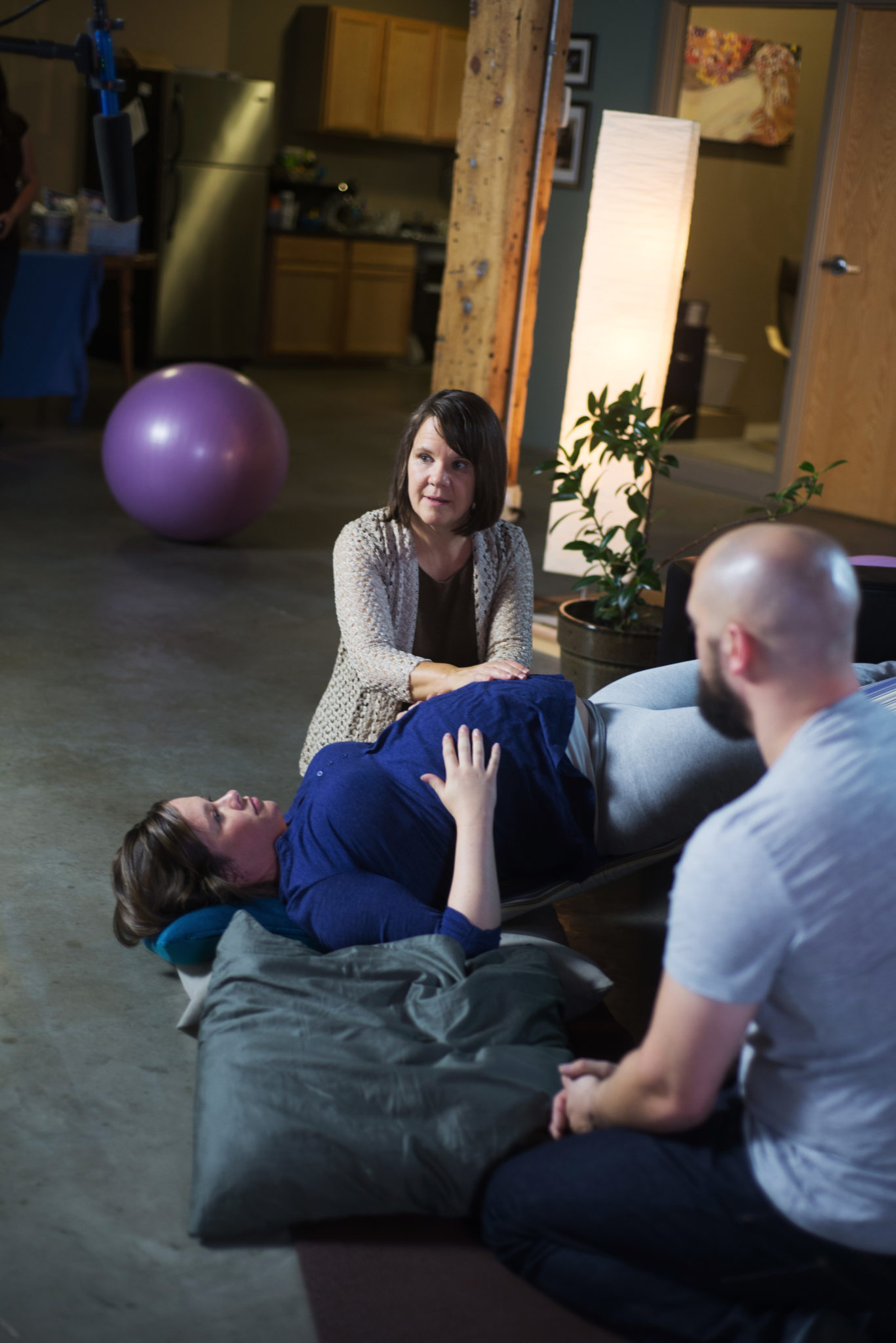 The Breech Tilt technique is done by many pregnant parents after 30 weeks gestation for 2-3 times a day. You can start as early as 30-32 weeks and continue through to the time that you know or think that your baby is head down. Some doctors don’t make suggestions for turning a breech until 36 weeks since many babies flip on their own and frankly, most providers don’t realize the body balancing advantage to increasing the chance baby will turn on their own. We find that it is easier for babies to turn at this time because there is a higher water-to-baby ration than later.
The Breech Tilt is not invasive. Ask your doctor if there is any medical reason not to do a Breech Tilt. This would be any medical reason for not going upside down. Be mindful of a safe set up, don’t let your board flip. Use a pillow to brace it if necessary.
Some people ask if the Breech Tilt can be done earlier. It can. I just don’t think it is a good idea to do it before 30 weeks unless you have a uterine shape variation, fibroids, or something else unusual. Begin regular daily body balancing activities for all positions to get general balance. You can do a daily Forward-leaning Inversion from 20 weeks. Unless you suspect you may have a specific need to get an early start, you can start Breech Tilt for a known breech at 30 weeks. They have different purposes!
The Breech Tilt works on two Spinning Babies Principles: Balance and Gravity. 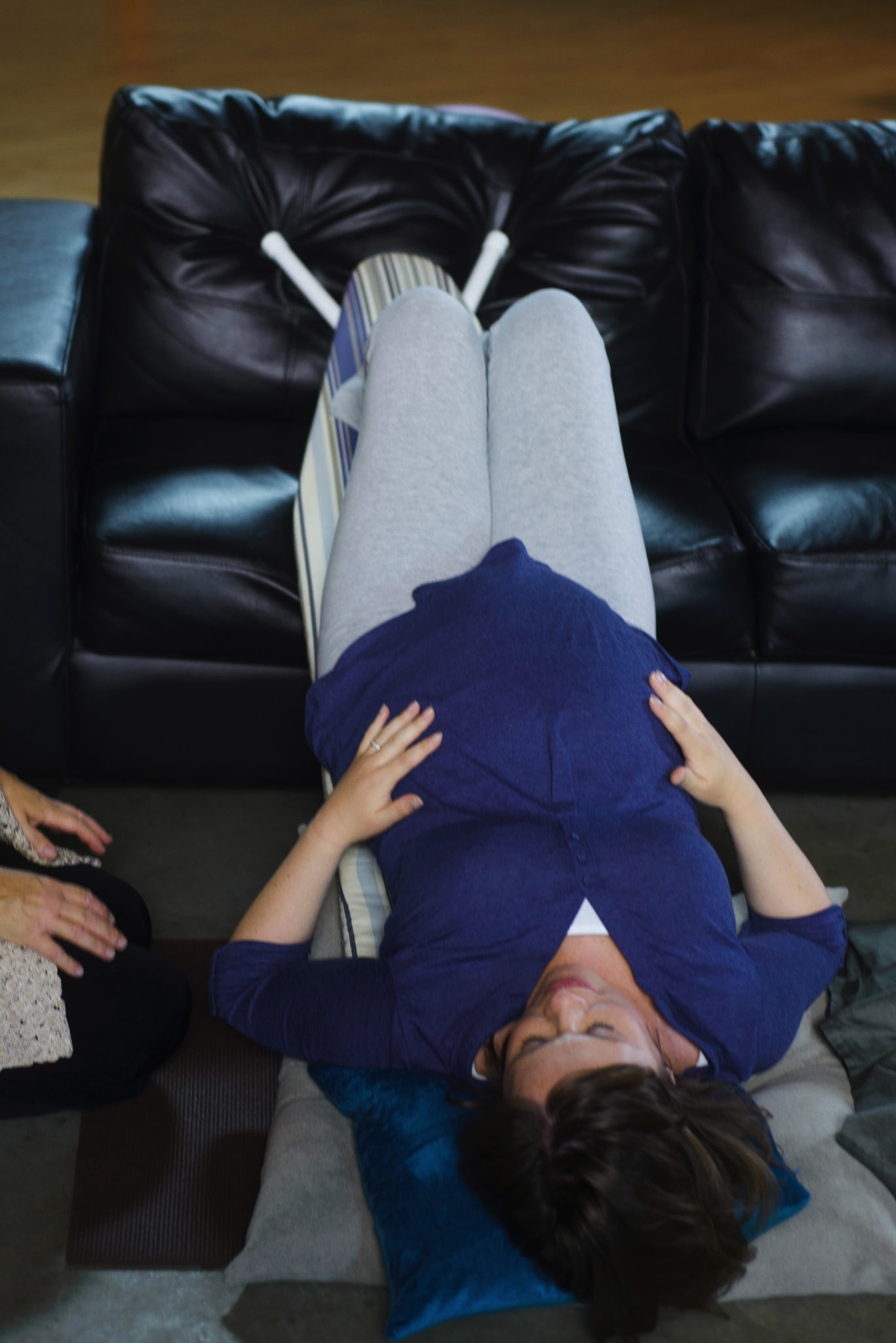 For Balance, the womb hangs from cervical ligaments stretching the ligaments slightly. When you get up the ligaments relax. It is getting up that sets the uterus a bit more centered over the pelvis and centered so baby can settle their bigger head down into the lower uterus at last.
With repetitions, this helps the lower uterine segment become more balanced. Better Balancing Acts: The Forward-Leaning Inversion, and chiropractic with Webster’s. Use these activities together.
For Gravity, gravity moves the baby onto his or her head. The weight of the baby’s body now bends the neck to help the chin to tuck on the baby’s chest (flexion). Tucking the chin helps baby flip, just as it helps a gymnast flip.
Also, the hips are encouraged to either come out of the pelvis or stay out of the pelvis. After the chin tucks, the baby is ready to move head down- if there is room to get the head to swing down and there is room in the lower uterine segment to receive the head. 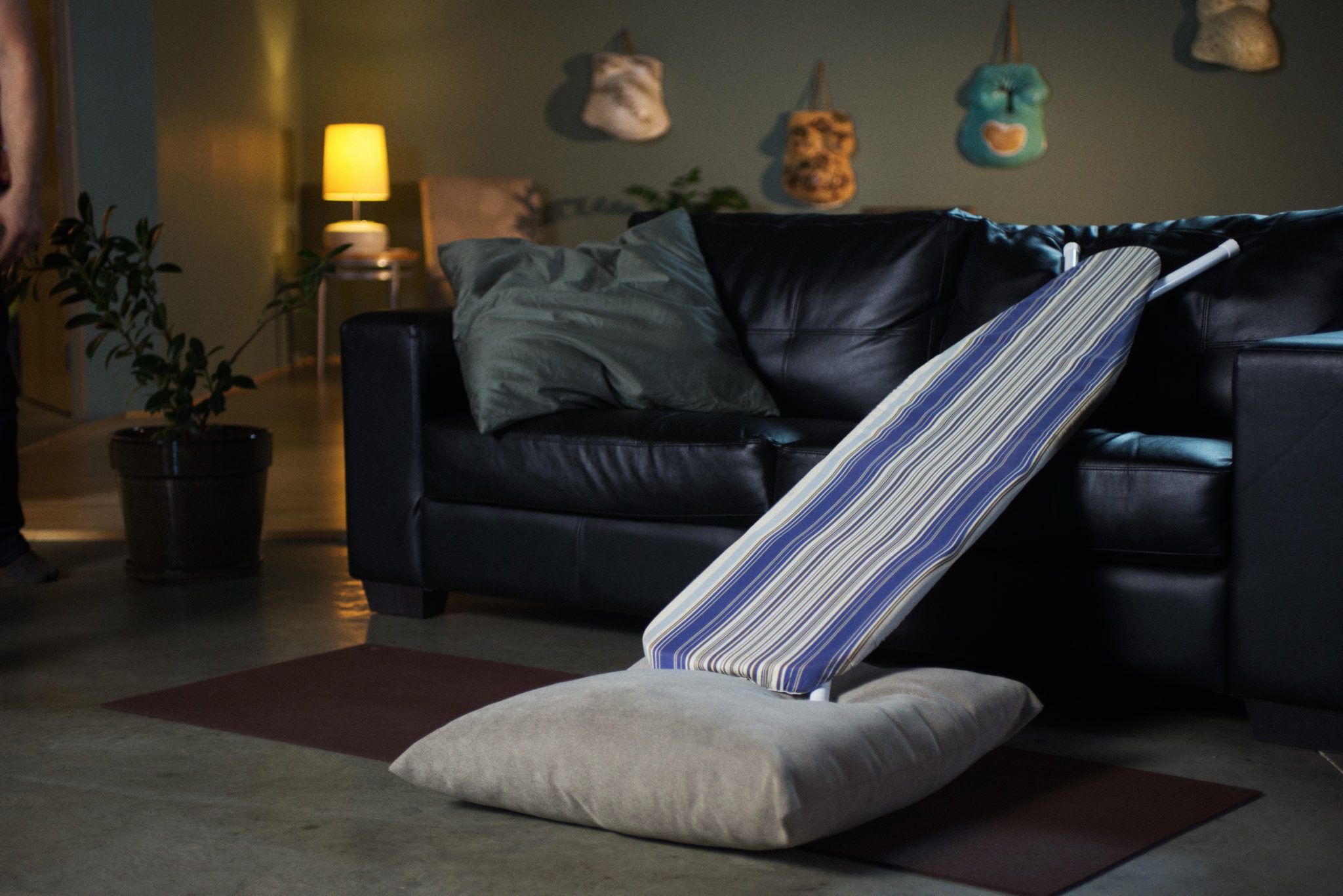 Secure a board or ironing board with pillows and lean it on the couch for the angle best to back s breech baby out of the pelvis and help baby flex the head as baby is directed onto the inner fundus of the uterus.

How to do the Breech Tilt

Get a broad plank of wood, like an ironing board.
Prop it at an angle against the couch or a chair. A few pillows stuffed around the base will help prevent tipping.
Another pillow goes under your neck.
The funny thing is next. Lie on the board with your head down and feet resting on either side of the board on the couch. Start by putting your head on the pillow at the bottom of the ironing board. Then lift your hips up using your legs and bring your hips onto the board. 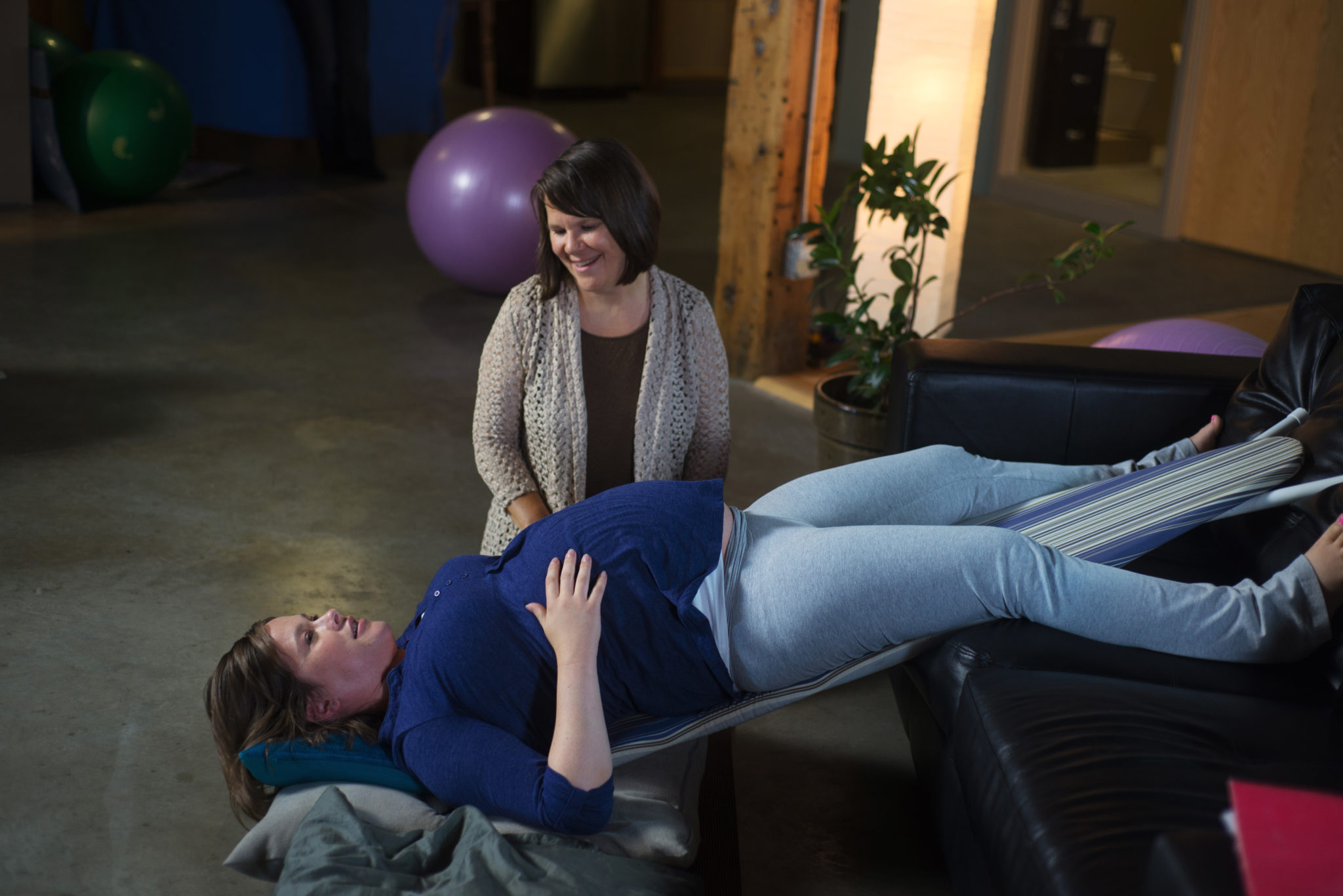 Try it a couple times to get it right. Remain on the board for 5 to 20 minutes, 3 times a day.
The Breech Tilt position is for creating the best angle to back a breech baby out of the pelvis to allow the baby to flip. Hanging out in this position may also help baby tuck the chin as the baby’s head presses into the top of the uterus.

What: The Breech Tilt 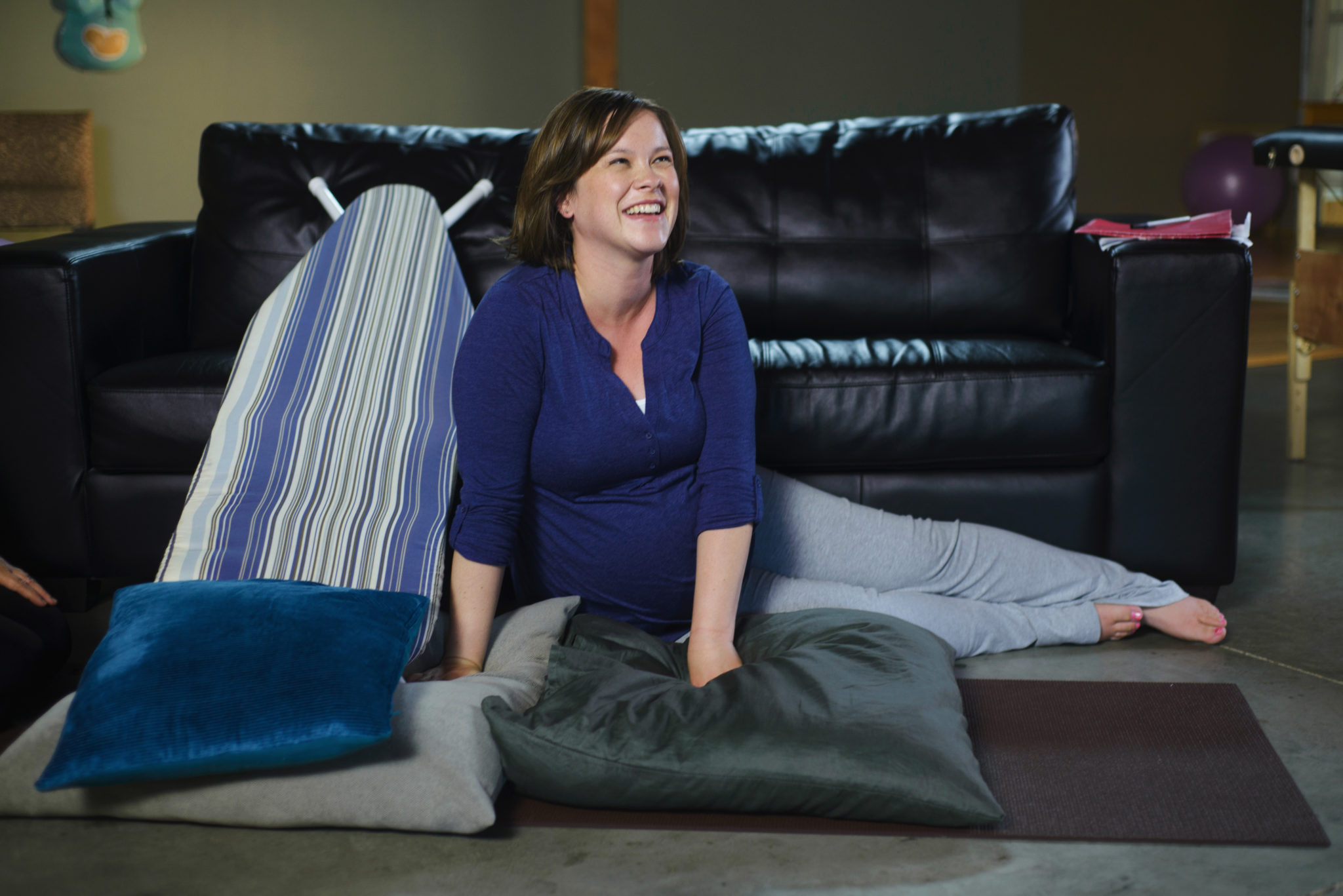 Photo by Tanya Villano
Why: To encourage flexion and to prevent engagement of the breech presenting baby.
When: 30 weeks to birth. Most women will do breech tilts daily, 3 times a day, from 34 weeks until the baby flips and use additional techniques during that time as well.
How: A sturdy board (shelf board, ironing board) is set so that the high end is 15-21 inches above the floor. A couch may help stabilize the top of the board while a pillow underneath may help it
When not to: If you have a head down baby, don’t do this exercise to try to rotate a posterior baby, for instance.

Before the Breech Tilt

After the Breech Tilt

If this doesn’t work, please get professional assessment and help for aligning and balancing the pelvis. 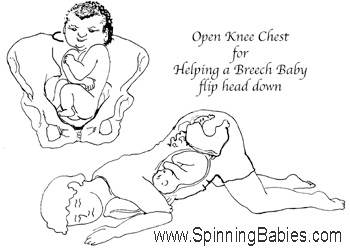 In the UK and Australia, women are encouraged to do the Knee-Chest position for 10 minutes, 3 times a day to help their breech baby turn head down. A study was done that showed improved rates of baby flipping compared to not doing some type of inversion.
Here are Gail and two Spinning Babies Workshop participants showing how to do the Open Knee Chest. 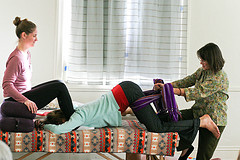 Open Knee Chest by Patience Salgado
Open-Knee Chest position with support. I’ve got a scarf wrapped over her thighs to help keep the weight off her chest and face. She puts her shoulders over the feet of her (sitting) helper. The mother’s face is completely between the helper’s feet!
For more understanding, read the Flip a Breech under Baby Positions. Read about Breech to see what I think the causes of breech babies may be, who are doing vaginal breech births, and what the risks might be for breech.