What is Dip the Hip? 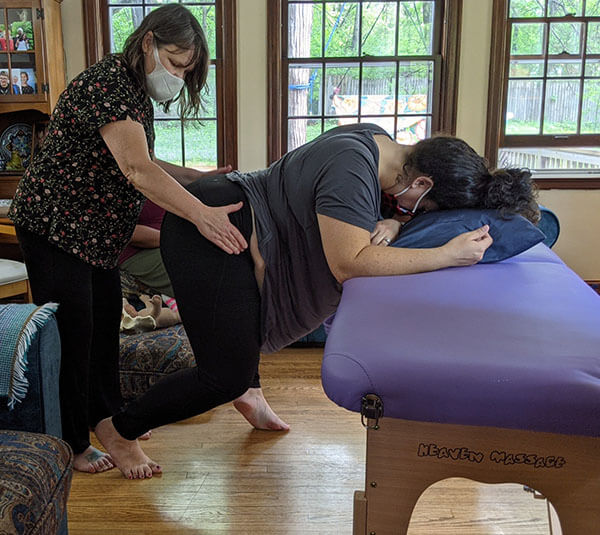 These figure 8 movements make room in the pelvis for the baby to rotate from the right to the left, and from posterior to anterior. Deb noticed a tight spot in the mother’s back that was associated with a lack of rotation to the anterior, so she developed this technique to loosen that spasm—and it works!

For those who don’t dance and aren’t supple, this can be a helpful addition to allow a baby to rotate from right to left where it may be easier to engage or turn from posterior to anterior.

Deb Lawrence, President of the Informed Beginnings certifying cooperative for Childbirth Educators, introduced a technique she’s developed to open tight hips and pelvic muscles in labor or late pregnancy. (I’m calling this Dip the Hip so the title reflects the action. Deb didn’t tell me the name of this technique.)

Adrienne Caldwell, therapeutic massage therapist, and Spinning Babies® advisor, recommends doing this gently, as women seem to get the same excellent results. Doing it gently may also reduce a small risk of achey sacroiliac joints afterward, but less likely than doing this too vigorously. 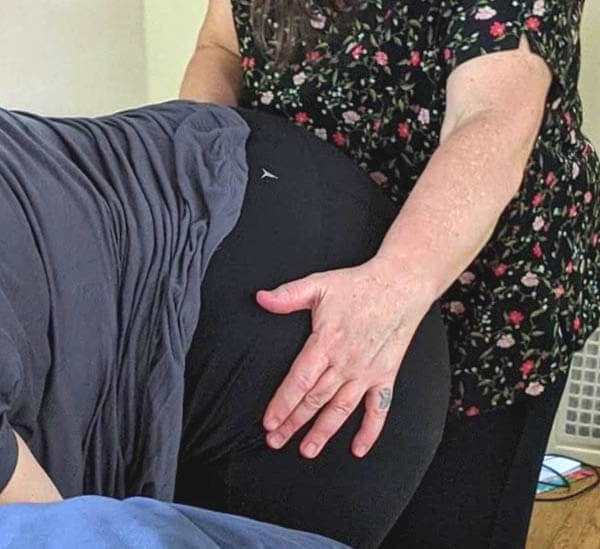 How to do Dip the Hip

Start slow and pause in between sides to get the movement.

The receiver leans over with legs somewhat straight but relaxed. They keep their back in a flat  angle. This creates a bend in the hips that is 90 degrees, like a the wall and the ceiling. They can hold a table or a counter. The body is relaxed.

The helper holds their hips, or the belt loops of their pants near their hips. The receiver follows the helper’s guidance. The helper lifts one hip while lowering the other. The receiver comes up on the toes and lifts the one hip with the helper. They roll to the side of their ankle and bend that knee to drop that hip.

The idea is to

How many times should I do Dip the Hip?

Doing dip the hip about 8 times through with a little centering in between each “cycle” of the hips helps keep the muscle attachments to the hips flexible in the back.

How does it work?

Dip the hip can be done in pregnancy every day and in labor as needed (the earlier the better), just don’t strain yourself. Overdoing anything in a vigorous way is not the way to soften for birth. Also, mix up your activities to lengthen other muscles as well.

Of course, dancing would be a more fun daily activity for many people. So try figure 8s in a dance move. Being smooth helps muscles be supple. We’re not jolting or jerking ligaments for our purpose. That would be a contradiction.

In labor, this seems to allow the baby to move off the right side and come over to the left. This action will help a posterior baby for whom Side-lying Release didn’t reach high enough in the back (which is just over the hips in the back).

When should you not do it?

Dip the hip is a soft tissue exercise for flexibility and balance in the pelvis and does not manipulate the baby.

For people who belly dance or can move their hips in dance, do figure 8’s in a smooth dance move. Actually if the back muscles to the back of the pelvis are supple, having someone help you move your hips this way may not be necessary.

Nicole Deelah’s story about this brave birthing woman makes me smile! She faced her resistance, both in doing an athletic move during labor and in her quadratus lumborum.

I just had a lovely birth on Monday.

Mama had been doing the putz-putz of early labor (first time mama) for a few days. That night, things got more uncomfortable but not crazy. Contractions were always about 3-4 minutes apart but short. They decided to call me to them when they went into the hospital. I met them there within the hour.

She was 4 cm and 90%. Baby was +1. 6 hours later, she was a 6 and had a very strong urge to push, but baby was descending into her hip (three checks confirmed this). Mom wasn’t ready to [accept suggestions] yet, so we just stayed mobile and did ‘hands off’ support. 4 hours later, she was ‘still a 6’ and baby hadn’t budged.

She felt very constipated and was discouraged. I asked her to give me 3 contractions to ‘dance up the mountain’ (my term for ‘dip the hip’, which I have been doing for years and years to resolve babies that are heading into the hip or low [occiput] transverse babies). I warned her that it would be intense, but that she could do it, and to stay focused on being loose and limp during the movements.

We then began ‘dancing up the mountain’ (dip the hip). She glowered at me, but she did it! I asked dad if he wanted to do it now that he saw how I helped her. He said, ‘Nope, she can blame you for this one,’ with a big smile on his face. Mama escaped to the toilet, he went with her, and I could hear her telling him she didn’t want to dance up the mountain anymore. He just kept reminding her it was only for two more contractions. She came out with a renewed sense of ‘I can do this’.

Two more contractions of dancing up the mountain. She did it! Right afterward, she sat on the edge of the bed to rest. Very next contraction and she was spontaneously pushing with so much pressure that she couldn’t speak. Daddy and I smiled. I waited till that one was done and went to get the nurse. Nurse came in and checked – 10cm and +3… baby was out 10 minutes later.

Dip the hip (or ‘dancing up the mountain’) is an exciting addition to our collection of body balancing exercises. Thank you, Deb Lawrence, for sharing this wonderful technique with us!