What is the Standing Release? 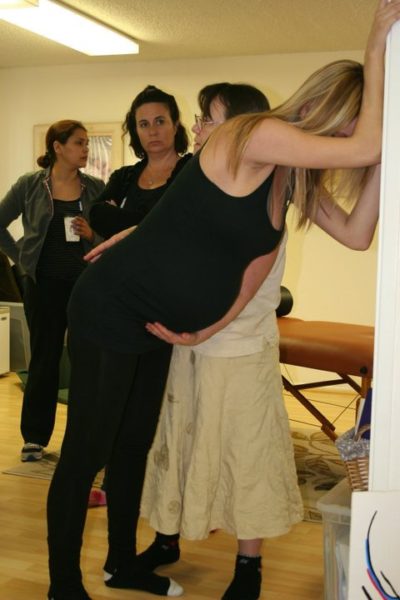 The standing release uses a very light touch to release the fascia around the pelvis and respiratory diaphragms.

When effective, this may improve fetal positioning, pelvic alignment, and even reduce heartburn and snoring.

The standing release is specific to the person’s needs and is done in a series of activities, or a “protocol” of craniosacral and fascial releases.

Who does this? A fascial therapist, and some Chiropractors, know various forms fascial release. This form is non-invasive and gentle. Partners can learn it with practice. Done lightly and regularly, there is anecdotal stories of avoiding posterior and breech baby positions. Ideally, this light touch exercise is done with several others to get a full benefit for baby’s position. Back ache may be relieved in one spot, then move to the new spot (mid back) to continue for a full release.

How? This technique is easy to do when you slow down and tune into the connection. But it is hard to explain through words and pictures. See our full page on Standing Sacral Release.

The mother stands facing a wall. She puts her hands or forearms against the wall. Her head does not rest on the wall unless she really wants it to, and then that’s part of the release. The helper stands to her side, facing either side the helper prefers. The dominant hand probably should go towards the mother’s back.

The helper so lightly touches the mother that they have to pay attention or contact is broken. The weight of contact is the weight of a nickel (or shilling?). The helper’s less dominant hand is on the mother’s lower abdomen – to start with. The helper’s more dominant hand is turned, fingers down, and the “ball” or base of the thumb is gently resting on the “buckle” of the sacrum. Finding the buckle takes a couple light passes from the top of the sacrum toward the tailbone. When the base of the palm feels resistance of a subtle “ledge” of raised bone under the woman’s skin, that’s the “buckle.” The “force” (however lightly given) is towards the direction of the sacrum, off into the air, not towards the mother. Remember — the fingers point down, but away from the body. The hand waits there, lightly (the weight of a nickel) until the buckle suddenly is gone and the hand slides suddenly off into the air. 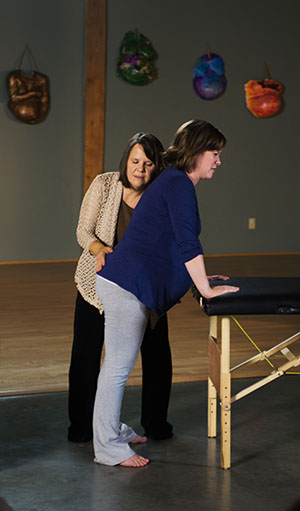 Both the mother and the helper have their knees slightly bent. This helps each of them respond better to one another and the subtle movements going on in the technique. The mother may feel like bending her knees quite a bit more and moving in response to her shifting fascia. This may be easy to resist, so the mother may be encouraged to listen to her body and move to make herself even more comfortable. The helper attempts to “follow” her, maintaining such a light pressure and perhaps moving the hand to follow the point of tension which sometimes leaves the sacrum to go somewhere else, for instance, the hip or knee, or lower back, etc.

One of you will know when you are done. The mother because she feels the release, the helper because he or she has run out of time, I suppose. Helpers shouldn’t worry that they don’t know what they are doing. They don’t really. But the fascia does. Follow the fascia!

How frequent? Doing this a few times in pregnancy and once in early labor is helpful. Do this after a long car ride to help avoid breech. Daily, if the partner can do it, when the baby is breech or persistently posterior.

Don’t use this if…. the mother can’t stand up.

What else can we do?

Use the abdominal release (diaphragmatic release) to complement the effect, or instead if standing is difficult.

Thanks: to Dr. Carol Phillips, DC, in Annapolis, MD, for teaching us the benefits of the Standing Sacral Release and to Deb McLaughlin, CST, in Duluth, MN, for bringing it to our doula trainings.

The standing release (a.k.a. standing fascial release or standing sacral release) was fine-tuned by Dr. Carol Phillips for a pregnant woman who couldn’t tolerate lying down for the abdominal release (diaphragmatic release).

Why do the Standing Sacral Release?