What is Shake the Apple Tree?

Loosen the fruit by giving the branch a rhythmic jiggle! Jiggling activates the stretch sensors of the muscles and creates room for baby to move. A jiggle relaxes the muscles more than the birthing person can do by mental relaxation. 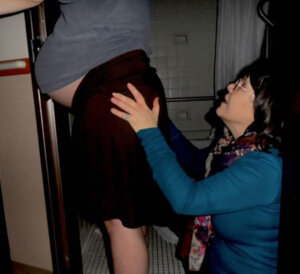 For more ways to jiggle see our main page on The Jiggle. The Jiggle is the 1st Sister of Balance in Spinning Babies® Three Sisters of BalanceSM.

How to Shake the Apple Tree

The labor position can be standing, hands-and-knees, Forward-leaning Inversion, or Open-knee Chest. Or, you can simply lean over a counter/dresser or another similar piece of furniture.

This can be done with your hands evenly on the buttocks and giving the buttocks a  long, rhythmical shake. Jiggle for about 20 minutes. Listen to the birthing person to make sure your efforts are relaxing!

Warning: Never shake the abdomen or even the hips vigorously. There’s a baby there! Learn more here. 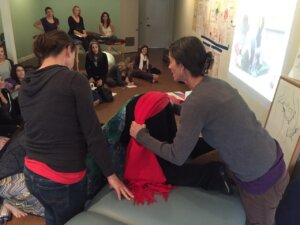 NIcole Morales shakes Gail’s apples in Forward-leaning Inversion to show birth professionals how to resolve a deep transverse arrest or a baby stuck in the pelvis at -2 station.

Partera Angelina Martinez was my influence. And although I learned it from her it was long enough ago where I’m sure I have changed her traditional methods along the way (which matters). As a student I assumed everyone knew how to use a Rebozo. I use it between contractions for at least 3 to 15 minutes. I’ll use the couch or bed as an incline as well. She was awesome. I’d love to sit with her and learn again knowing what I know now. I’ve never called it anything in particular.

I was taught a technique in my doula training that was called “apfel-schtuken” (if I remember correctly). Sounds like it might mean “stuck apple” in German. Anyway, it was where the mom was on hands-and-knees rocking forward and backwards. As her doula, I was positioned behind her and when she was at the closest point to me in her rocking, I gave both her sitz bones a gentle yet firm “thunk,” sending her forward again. It’s a little awkward to do, but I got a baby to get out of a funky position he was lodged into using that technique. Sometimes apples need a little help, ya know!

Pregnancy and Childbirth under the PsychoNeuroEndocrine Perspective
$90.00
Add To Cart