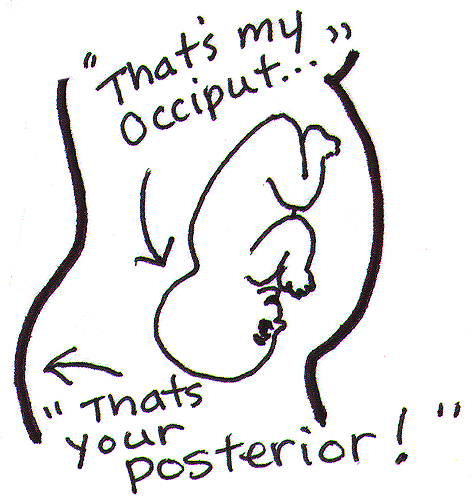 What is a posterior fetal presentation? The baby’s back is spine-to-spine with the mother.

Why would posterior position matter in labor?  The head is angled so that it measures larger. The top of the head molds less than the crown.

Baby’s spine is extended, not curled, so the crown of the head is not leading the way. Baby can’t help as much during the birth process to the same degree as the curled up baby. 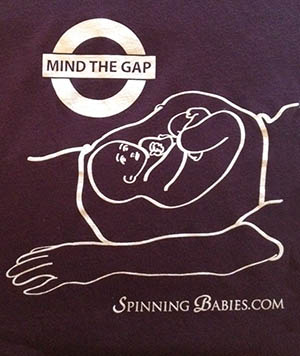 Some posteriors are easy, while others are long and painful, and there are several ways to tell how your labor will be beforehand. After this, you may want to visit What to do when….in Labor. 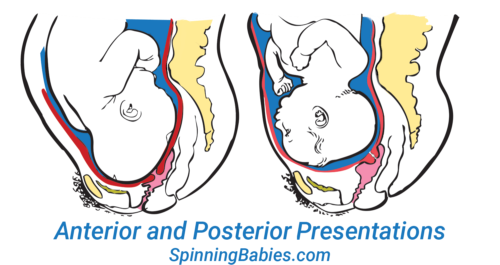 Belly Mapping® tips:  The Right side of the abdomen is almost always firmer, but the direct OP baby may not favor one side or the other. Baby’s limbs are felt in front, on both sides of the center line. A knee may slide past under the navel. 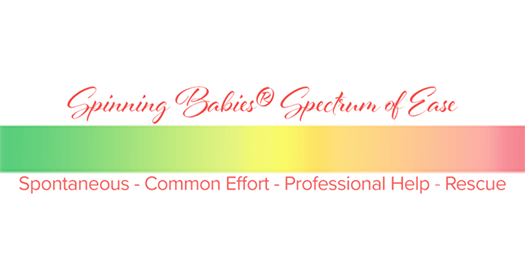 The OP position (occiput posterior fetal position) is when the back of the baby’s head is against the mother’s back. Here are drawings of an anterior and posterior presentation. 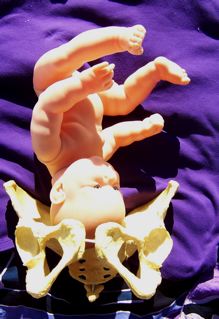 Look at the above drawing. The posterior baby’s back is often extended straight or arched along the mother’s spine. Having the baby’s back extended often pushes the baby’s chin up.

Attention: Having the chin up is what makes the posterior baby’s head seem larger than the same baby when it’s in the anterior position.

A large baby is not the same issue, however. The challenge with a posterior labor is that the top of the head, not the crown of the head leads the way.

A baby with their spine straight has less ability to wiggle and so the person giving birth has to do the work of two. This can be long and challenging or fast and furious. Also, there are a few posterior labors that are not perceived different than a labor with a baby curled on the left.

Why? Anatomy makes the difference. Learn to work with birth anatomy to reduce the challenge of posterior labor by preparing with our Three Sisters of BalanceSM and more.

In Labor, do the above and add,

There are four posterior positions

The direct OP is the classic posterior position with the baby facing straight forward. Right Occiput Transverse (ROT) is a common starting position in which the baby has a bit more likelihood of rotating to the posterior during labor than to the anterior. Right Occiput Posterior usually involves a straight back with a lifted chin (in the first-time mother). Left Occiput Posterior places the baby’s back opposite the maternal liver and may let the baby flex (curl) his or her back and therefore tuck the chin for a better birth. These are generalities, of course. See a bit more about posterior positions in Belly Mapping® on this website. Want to map your baby’s position? Learn how with the Belly Mapping® Workbook.

The spectrum of ease across posterior labors 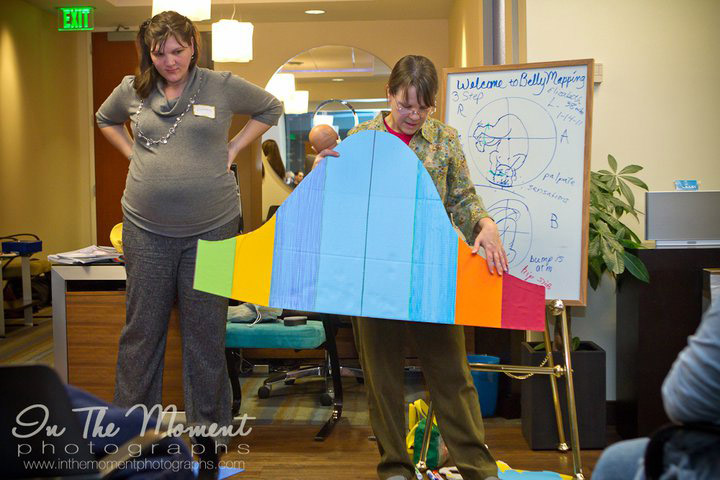 There is a spectrum of ease across posterior labors. It’s not a bell curve, though; easy posteriors are not as common as challenging ones. Usually, babies turn after many strong contractions. Without help, almost half of women will give birth to their posterior babies. The techniques called The Fantastic Four are likely to improve mothers’ and babies’ ease of birth! Learn these techniques that will help you avoid unnecessary surgery for your baby’s birth by watching the Spinning Babies® Parent Class video: 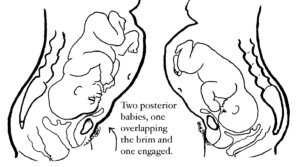 With a posterior presentation, labor may or may not be significantly affected. There is a spectrum of possibilities with a posterior baby. Some women will not know they had a posterior baby because no one mentions it. Either the providers didn’t know, or didn’t notice. If labor moved along, they may not have looked at fetal position clues since there was no reason to figure out why labor wasn’t progressing. If a woman didn’t have back labor (more pain in her back than in her abdomen), the provider may not have been “clued into” baby’s position.

Some posterior labors are manageable when women are mobile, supported, and eat and drink freely, as needed. Some posterior labor needs extra support that a well-trained and experienced doula may provide, but that typically a mate or loved one would not have the skills or stamina to keep up with. Some posterior labors progress only with the help of a highly-trained pregnancy bodyworker or deep spiritual, or otherwise a non-conventional model of care. Or, they seem only able to finish with medical intervention.

Some posterior labors are served by an epidural, meaning the pelvic floor relaxes enough for the baby to rotate and come out. Some epidurals, on the other hand, make it so that a woman can not finish the birth vaginally.

NOTE: Parents should know — some birth researchers, like Pediatrician John Kennell, are seriously asking whether a mother’s epidural turns off her body’s release of pain-relieving hormones which a baby relies on during childbirth. Some babies can’t turn and can’t be born vaginally and must be born by cesarean. This is a spectrum of possibilities. I’ve seen every one of the above possibilities several times and can add the wonderful experience of seeing a woman laughing pleasurably and squatting while her posterior baby slid out on to her bedroom floor.

Possible posterior effects, some women will have one or two and some will have many of these: 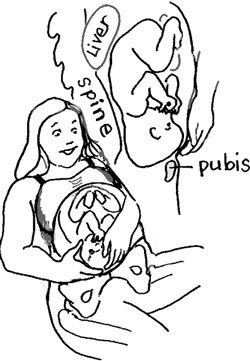 The forehead that overlaps the pubic bone after labor starts must turn and drop into the pelvis to allow the birth to happen naturally. A cesarean finish of the labor is possible. Look at Abdominal Lift and Tuck in Techniques to guide you to solutions for easier engagement and progress.

These effects are in comparison to a baby in the left occiput anterior or left occiput transverse fetal position at the start of labor.

Who might have a hard time with a posterior baby? 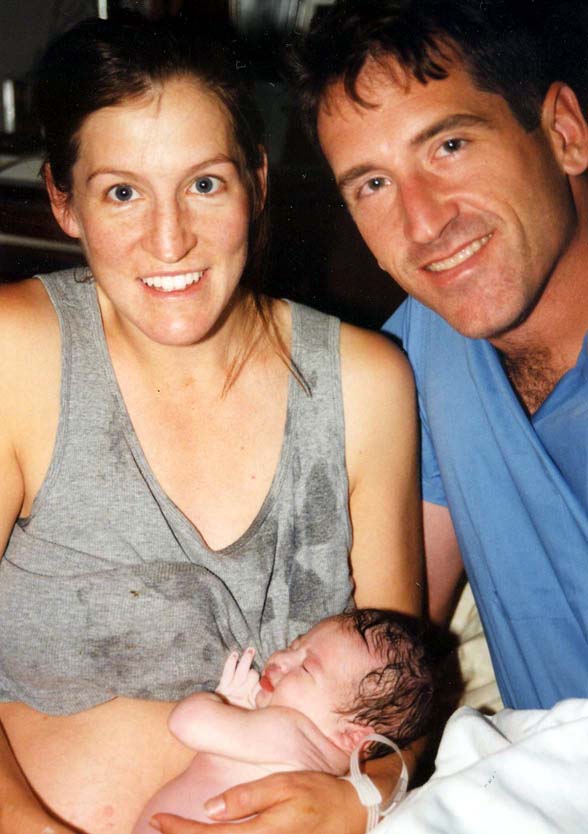 This family just had a fast posterior birth of their second child! Ease in labor includes other factors beyond baby position.

Who is likely to have an easy time with a posterior baby?

Any woman may also have an easier time than public opinion might indicate, too, just because she isn’t on this list. Equally, just because she is on the “hard” list doesn’t mean she will have a hard time for sure. These are general observations. They are neither condemnations nor promises. Overall, some posterior babies will need help getting born, while some posterior babies are born easily (easy being a relative term).

Let’s not be ideological about posterior labors.

While most posterior babies do eventually rotate, that can still mean there is quite a long wait – and a lot of physical labor during that wait. Sometimes it means the doula, midwife, nurse, or doctor is asking the mother to do a variety of position changes, techniques, and even medical interventions to help finish the labor. Patience works for many, but for some a cesarean is really the only way to be born. Read What To Do When…in Labor.

What causes a baby to be posterior?

Most babies who are posterior early in labor will rotate to anterior once labor gets going. Some babies rotate late in labor, even just before emerging. Studies such as Lieberman’s show that at any given phase of labor, another 20% of posterior babies will rotate so that only a small number are still posterior as the head emerges.

My observations are that the majority of babies are posterior before labor. The high numbers of posterior babies at the end of pregnancy and in the early phase of labor is a change from what was seen in studies over ten years old. Perhaps this is from our cultural habits of sitting at desks, sitting in bucket seats (cars), and leaning back on the couch (slouching). Soft tissues such as the psoas muscle pair or the broad ligament also seem to be tight more often from these postures, from athletics (quick stops, jolts, and falls), from accidents, and from emotional or sexual assault.

Being a nurse or bodyworker who turns to care for people in a bed or on a table will also twist the lower uterine segment (along with some of the previously mentioned causes). This makes the baby have to compensate in a womb that is no longer symmetrical. Less often, the growing baby settles face-forward over a smaller pelvis, or a triangular-shaped pelvis (android). At the end of pregnancy, the baby’s forehead has settled onto a narrower than usual pubic bone, and if tight round ligaments hold the forehead there, the baby may have a tough time rotating. These are the moms and babies that I’m most concerned with in my work at Spinning Babies®. A baby that was breech beyond week 30 – 34 of pregnancy will flip head down in the posterior position. A woman with a history of breech or posterior babies is more likely to have a breech or posterior baby in the next pregnancy. However, she may not have an as long labor.

The best way to tell if your baby is OP or not, usually, is if you feel little wiggles in the abdomen right above your pubic bone. These are the fingers. They’d feel like little fingers wiggling, not like a big thunk or grinding from the head, though you might feel that, too. The little fingers will be playing by the mouth. This is the easiest indication of OP. The wiggles will be centered in the middle of your lower abdomen, close to the pubic bone. If you feel wiggles far to the right, near your hip, and kicks above on the right, but not near the center and none on the left, then those signal an OA or LOT baby (who will rotate to the OA easily in an active birth). After this, you might go to What to do when…in Labor.

Check out our current references in the Research & References section.

Pregnancy and Childbirth under the PsychoNeuroEndocrine Perspective
$90.00
Add To Cart